We have been told again and again by our parents, teachers, and many others that “Early to bed and early to rise makes a man healthy, wealthy and wise.” But if you are a late nighter, you must have found this quote incredibly hard to follow. Add to it the tyranny of others telling you that what you are doing is wrong. They might have shared articles with you which talk about the benefits of waking up early. They may have offered you tips to become a morning person. 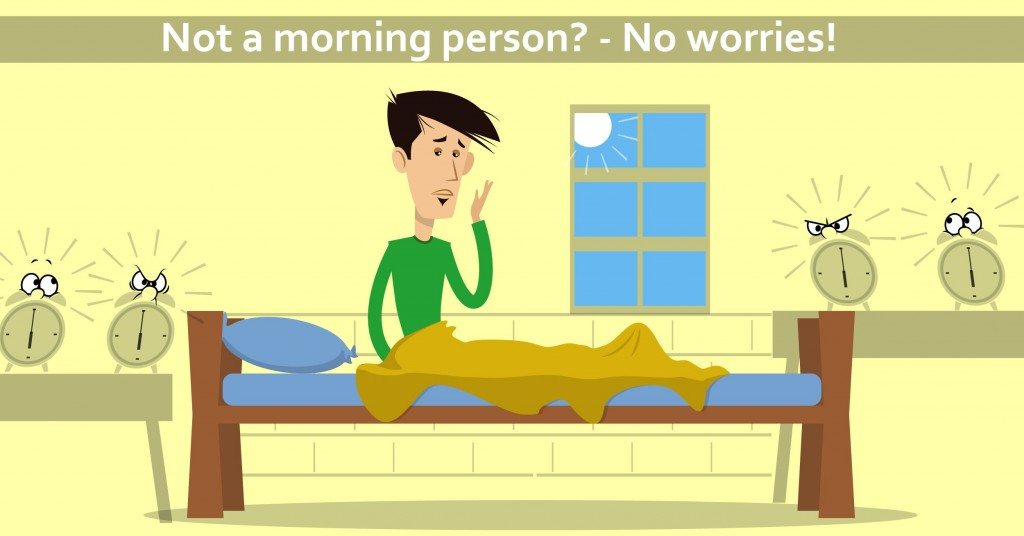 But now, we have good news for you – No worries if you are not a morning person!

Psychologist Richard D. Roberts of the University of Sydney and Patrick C. Kyllonen of the Air Force Research Lab conducted an experiment on 420 participants to test their intelligence. The experiment tested vocational knowledge, general math, reading abilities and memory power of the participants and here is what they reported –

“The results indicate that, contrary to conventional folk wisdom, evening-types are more likely to have higher intelligence scores.”

The truth is that people are different and applying the same theory to all is like fitting a round peg in a square hole. If you aren’t a morning person, it’s alright. If you are most productive between 2 AM-4 AM, new research suggests that you should finish your work at that time.

Another point to be noted is that,

Just because some people naturally wake up early, it doesn’t mean that all of them are productive at morning. Likewise, everybody does not need to be a morning person to be productive.

Even companies can rejoice on reading this. There are several who find it difficult to open their eyes in the morning and much more difficult to attend morning meetings. It would be a good idea to not force these people to attend morning meetings like others. In Current Biology’s study, the author states the structuring of the working day according to people’s sleeping habits is not only good for one’s well-being also for a company’s productivity.

The research carried out by Ludwing-Maximilian University in Germany says that when the body’s natural rhythm doesn’t match that of the working day it results in a jetlag. This further leads to employees not being able to sleep during the week and staying in the bed for longer during the weekends to balance their sleeping time of the week.

Epidemiologists at Southampton University in England challenged Franklin’s tyranny of the morning people. They analyzed a national sample of men and women who had been surveyed on sleep patterns. Health, wealth, and wisdom were also parameters that were measured. This was what they found out –

Night owls had larger income and more access to cars than the morning larks.

The underlying message is:

There is no one right way. What matters is when you are comfortable and most productive. If morning is not the time you can perform best, there is no point in forcing yourself. Find out what works for you – morning, noon or night. Find out when you are most alert, focused, and productive, and build your schedule accordingly.

And to the people who tell you to keep changing yourself – About 50% of a person’s body clock is due to genetics. A significant change can be a challenge and hence, it is best for each person to decide for oneself.