Virginity is important to get married in India. Isn’t it? If I go about taking a poll to get the answer from a varied crowd in my country, I wouldn’t arrive at a definitive answer even by the end of this century. So I am gonna do what every Tom, Dick and Harry around me is doing: form my own opinion. Only this time, I am going to actually look into this question before I put on the judgemental hat. 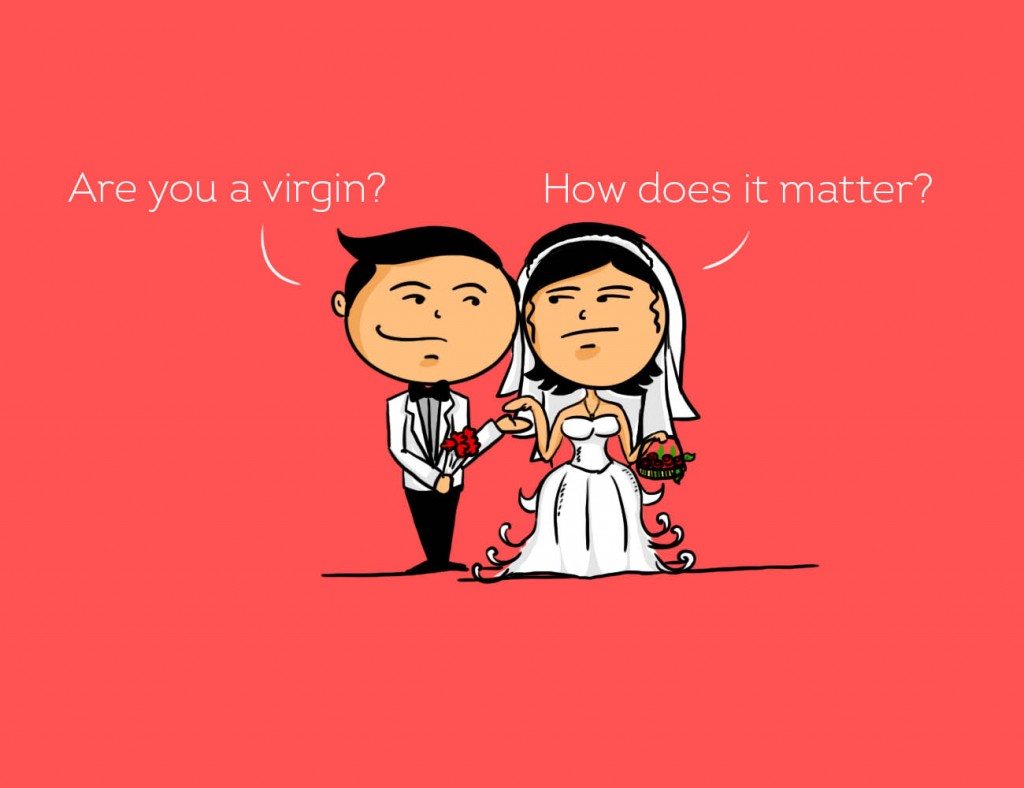 To make things a little less boring, I am going to study the scenario by categorizing people based on the general opinions:

Species of this class can be found over large parts of the country. In simple terms, they can be referred to as the type of modern human beings who are heedful to their progenitors (parents), irrespective of what they truly want. All aspects of their life, like education and career, is pre-determined. So, when it comes to marriage, the species belonging to this taxonomic group tend to listen to their parents and marry the girl whose virginity has been tested, by them beyond question and has been deemed fit for marriage. Despite the fact that, deep down, the guy couldn’t have cared lesser if the girl was not one. In the long run, these organisms either turn into exact copies of their parents and treat their kids in a similar way or get exhausted and end up living life on their own terms, preferably with a girl of their choice, regardless of her virginity status.

True to their name, these species rule the dorkdom. According to them, the girl they marry SHOULD be a virgin. No compromise. Case in point, they have the inherent right to be in as many relationships as they please and the rules of their dorkdom, sure as hell, don’t apply to these individuals. Unsurprisingly, almost always, these are the same organisms that do not want a female off-spring in their house but want their pregnant wives to be examined by a female doctor.

Belonging to a phylum of uptight organisms, these are that males that tend to exhibit multiple chauvinistic characteristics. They can be explained as the beings that live their lives based on a set of principles. In most cases these people strive to be perfectionists and tend to be control freaks – practically freaking out when things don’t go as planned, which is almost all the time. When it comes to marriages, they expect the bride to be a virgin. Their concept is simple to understand, “I am a virgin; I want a goddamned virgin bride!”

Well, I seriously do pity these species. Dude, Wake up! There is something called Revirginizing. (Google it, if you haven’t heard of it already)

These are the type of people who have accepted the influence of the westerners over us. They can be broadly classified into two further types:

Finally, coming to the Kingdom to which all these classes belong:

This kingdom can be further divided into various Phylum based on the characteristics of a specific set of parents. For instance: the type of parents who strictly believe that virginity is an essential trait in determining a suitable mate to their offspring and on the other hand, the type of parents that have modernized their thought process in accordance with the western culture and don’t really consider virginity to be a determining factor. However, due to the influence of external agents like relatives, colleagues, neighbours and other members of the society, the most of the organisms belonging to the Kingdom Parenta would agree with the generalization that virginity is indeed a trait that has to be inspected before their young ones are permitted to live together. Due to this, here is how the “auction version” of a meeting between the parents of two potential mates looks like:

Ladies and gentlemen! Presenting before you, a fine specimen of traditionally pure bred, culturally sound, compassionate and passive bride. Let the bidding begin! But do remember… this rare being sure does call for a suitable partner, don’t you think? *wink*

Awesome yaar! That is a very decent first bid for this damsel who cooks the most delicious food you could ever taste. She is also well educated and works. But will still take amazing care of you and your family after marriage. Anyone?

*claps delightfully* in addition, she doesn’t indulge in any bad habits. Going once..

Whoa! Great going gentlemen. Going once. Pause. Going twice…oh! Did I mention? She is also a VIRGIN!!

Smiles shrewdly. NRI ladka!! Going once. Going twice. Pause. Going thrice! Aaand SOLD! Congratulations young man! You just got yourself a very pretty, flower-like lady with the purest nectar, if you know what I mean. *wink*

The concept of “Importance of Virginity in an Indian Marriage” is highly debated in which all the arguing parties strongly believe in their ideology. In our country, more that 7,200 children, including infants, are subjected to child abuse. Expecting such kids to grow up into virgins would be like standing under an apple tree and waiting for an orange to fall from it. Besides, factoring other important occurrences like the damage of hymen in sports persons, judging the girl based on the presence of barely an inch of skin becomes absurd. We also need to consider the point that in today’s adulterated world, it is entirely possible that the female never develops the hymen or it gets damaged due to exposure to heavy medication. Whoa! This does make me think that “Virginity” is, in fact, over-rated in our country. That brings me to the question: what about the boy’s virginity? Is that actually a thing?? But more on that later, because right now, I am simply verifying the importance of virginity in an Indian marriage and rest assured, its only the virginity of the bride that is under question in most marriages in our country. I am now as confused as I could possibly be trying to conclude here.

My mum entered the room and I asked her out of the blue, “Maa, is virginity important to get married in India?” She paused for a second and replied,“Trust is. Virginity isn’t!”

Liked our Blog? Don’t forget to share your thoughts on the topic in the comments below.