Raj and Sushma have been married for 6 years and they were your regular working class, urban couple. Every Friday evening, the two would find time for each other and eat out, or go to a party or watch a movie. They agreed that they would have children after their career stabilises at a point where they can afford to take time out of it. Both of them are very ambitious and have all the makings of being successful in their respective fields. In short, life was good for our urban couple.

That is, until, Sushma found out that Raj was cheating on her.

Her whole world came crashing down.

Things she believed in were true for a fact – like wanting to grow old with Raj, having children with him, moving into that upmarket house in Bangalore – all of those things that she thought was a given, suddenly were put into question. Raj’s infidelity put much of Sushma’s future into question. But that wasn’t her primary concern. The pain of knowing that her doting husband desired someone else – physically and emotionally – made her a walking wreck.

Raj on the other hand was going through his own set of issues. While on one hand, the guilt of the secret he kept had reduced considerably, the pain he thought Sushma would go through if she ever found out was as bad as he thought it would be, if not worse. It’s not like he didn’t love Sushma. He planned much of his future with Sushma too. But he couldn’t resist the advances of the attractive Shefali. He liked her company and missed the thrill of the early days of a courtship. He hated himself every time his thoughts would try and justify his actions by telling him that things with Sushma had become a little monotonous and boring.

Raj is repentant. Sushma is inconsolable. But she just cannot bring herself to hate him. Hell, she can’t even bring herself to think of a life without him. And Raj isn’t making it easier either – he is being repentant and as understanding as he can be. Every insult Sushma can throw at him, he takes it. Sushma was never the aggressive one in an argument and she couldn’t stay angry at him. But she was hurt. Raj broke her trust and it has become hard for Susma to believe in anything.

It took a few weeks for Sushma to come back home. She lived with her friend during this time. While she didn’t have to see Raj’s sombre guilt filled face every day, she couldn’t stop thinking about him. Her routine had been turned upside down. She found herself absently looking for Raj when she woke up from a nap a couple of times, and it used to feel like all this was a bad dream. But when she realised that there was no response from Raj, the burden of reality came crashing down on her.

To Raj’s credit, he gave Sushma her space. He also severed all ties with Shefali and put down his papers at his place of work, in order to win back Sushma’s trust. All this helped Sushma muster enough courage to work things out with Raj.

The first conversations were hard.

“Why?” she croaked, trying to look at Raj through tear filled lashes, only to find a pained look on his face; the lump in his throat almost visible to the naked eye. 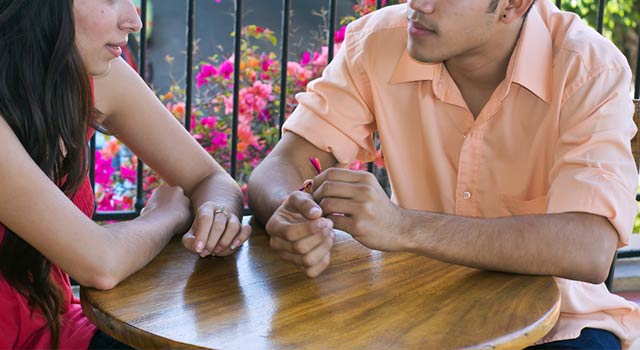 There were many answers to that – some self blaming, some accusatory, some practical. Answers that touched the topic of an unsatisfactory sex life really hurt Sushma. She would often lash out at Raj, in order to hurt his ego. But it didn’t make Sushma feel any better. Raj mostly stood quietly, listening to every insult hurled at him.

He would sometimes mutter “I deserve it.”

Soon the conversations became more detailed. Sushma wanted to know everything. When and how they met? How did he hide this from her for so long? Was he really with his friends that one time? Where did they meet up? Intimate details about their sexual escapades. Who else knew about this? What made Shefali more attractive than her? Did she know that Raj was married? Sushma didn’t hold back. And Raj, patiently and truthfully, answered everything, no matter how difficult it got.

Soon enough, it became a little easier to talk about. Sushma always valued Raj’s honesty and even though this was very painful for her to talk about, she could see the man she once saw her future with.

It’s been a few months since Sushma found out about Raj’s affair. Raj now has a new job – he struggled a lot to find a new one, but didn’t complain even once. Winning back Sushma’s trust was more important and she knew how hard he worked at his old job to get to his post. Sushma could tell that Raj was making an effort. But she was too scared to believe anything wholly anymore.

Sushma tried too. She was at a crossroads of sorts.

One was to leave Raj and start over again. The other was to try and work things out with Raj.

She chose the latter for now, fully understanding that there was a high chance that none of this would work. She loved Raj, but she could not bring herself to forgive him. But Raj understood that, and was willing to accept and support whatever Sushma chose to do.

Things are almost looking good now. They don’t speak much about the affair now, except for the occasional query from Sushma. There have been a few days where they haven’t even spoken about it and it almost felt like nothing happened. Sometimes they go on long walks or to the local zoo. At the same time, there are bad days too – shouting, throwing things and pulling no punches with insults.

It’s going to be a long road before things become truly normal between Sushma and Raj. But they’re working on it. Do you think things will be normal between them? Tell us in the comments section.

Are you having marital issues? Are you seeking professional help for those isssues? We can help. Talk to an Expert at YourDOST today.