The adage that ‘The hand that rocks the cradle rules the world’ in its complete sense means giving birth to a child is prerogative of a women and her position is determined by that. 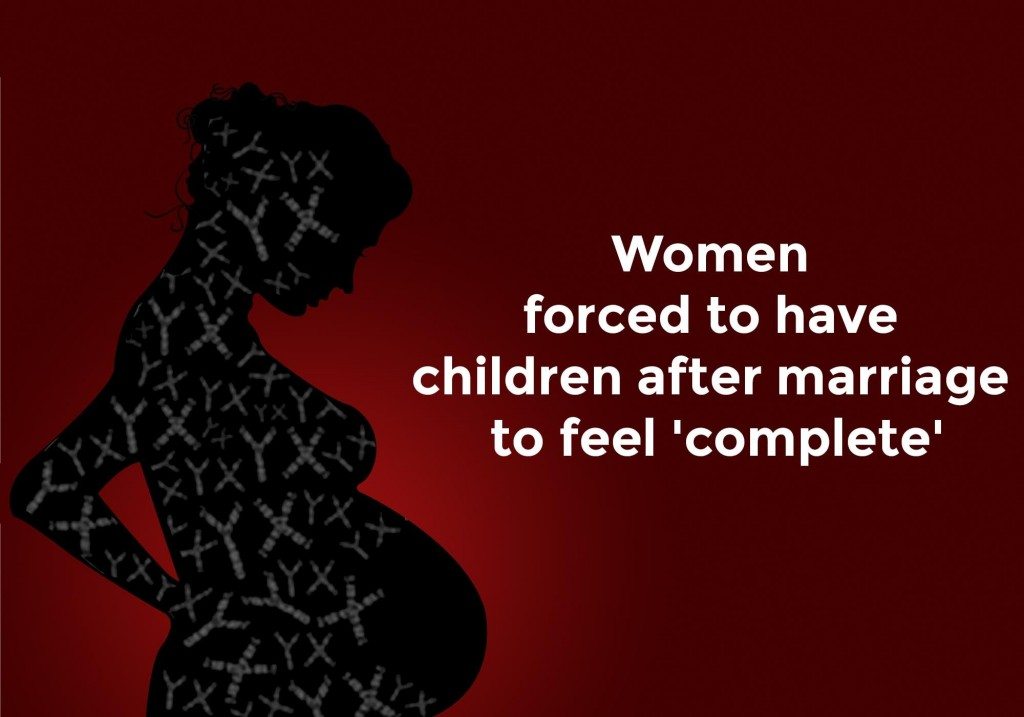 A ‘complete’ woman is a woman who is a mother and manages all other roles. Motherhood has been given importance from times immemorial.

In earlier times if a woman could not be a mother, she was looked down on and considered inauspicious. A woman who could not bear children was shunned from social functions as earlier the role of women was to only look after the house and produce heirs to the family.

Today, thanks to education, a fraction of society is able to accept that motherhood is just one role of women, among many others. However, the majority still view a woman not having a child as a problem.

As Oscar winning actor Marisa Tomei said in an interview, “”I’m not that big a fan of marriage as an institution, and I don’t know why women need to have children to be seen as complete human beings”.

A secondary position to the identity of women and the inability to understand a woman’s needs leads to pressurizing her to have children. The patriarchal system prevalent in society expects women to have a family and children as their first priority.

Take for instance, Ms. R a highly educated and hardworking professional married for a year. Now there is pressure on her to have a child. Family and relatives question why she has to work, since her husband is earning well enough for the both of them.

It’s been an year since they got married, and everyone wants to know if they are planning to have a child. They are advised that conceiving becomes difficult later on, and that they must not put it off for too long.

Societal pressure breeds the thinking that a woman who is a mother will be responsible and duty conscious.

Sometimes the mentality and attitudes of women themselves encourages others to pressurize them. Take for instance Ms. G, who believes that what her in laws think of her is ultimate. She tries very hard to please them and make them happy. Her in laws believe in age old rituals and when she did not conceive after an year of being married, she was taken to a black magic artiste.  As a result, she was asked to observe fasts and follow a million other rituals, which Ms. G did blindly. Her bringing up itself was with the idea that her husband’s place is ultimate and that she must follow his orders.

Many couples and people are also of the opinion that a child can fix a bad marriage, while that is not the case at all. As author Matthew D Johnson writes in his article for The Conversation,

“While the negative marital impact of becoming parents is familiar to fathers and mothers, it is especially insidious because so many young couples think that having children will bring them closer together or at least will not lead to marital distress.

Yet, this belief, that having children will improve one’s marriage, is a tenacious and persistent myth among those who are young and in love.”

Women are not allowed to feel whole and complete without becoming mothers. While motherhood is definitely a cherished experience and way of life for many women, it is a life altering decision that cannot be forced on anyone. Whatever happened to freedom of choice?

To conclude, as Naomi Schaefer Riley writes in her article for the New York Post,

“Are women people yet?

This is the question with which Kate Bolick concludes her new book ‘Spinster: Making a Life of One’s Own.’

Bolick, the 40-something singleton, argues that even in our enlightened age where we tell girls they can grow up to be whatever they want, the question of marriage looms far too large. “Are we finally ready for a young woman to set out on the long road of her life as a human being who inhabits but isn’t limited by her gender?”

If you are a woman, who feels pressurized to have children and need someone to talk about it, YourDOST experts are here to help! Get in touch with us for expert, personalized advice.