BLOG MENU
7 minutes
“Arise, Awake, Stop not until your goal is achieved.”  ~ Swami Vivekananda
That is the first thing I read every morning when I wake up!
When I reflect upon it, I do realize that it’s easier said than done. My own life and my story are a witness to both sides of this coin.
A young boy who came to a city full of lights and sounds, soon found himself lost in the dazzle of the fast life. Lost would have been a better description. And quiet natural from someone coming from a slow paced, small village.
The year was 1996. My first year of enrolling into the Army Institute of Technology. It was exciting to meet students from all over the country. Strange languages, different dialects and even more strange was the act of torture called “Ragging”. While I struggled with translating all that I wanted to say into English on the inside, I simply could not fathom what one achieved through this heinous act on the outside! 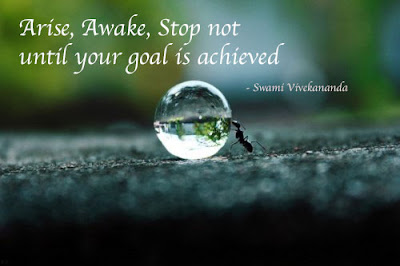 The first semester saw me on the very first row, soaking up every word of what was taught. I knew nothing about not being on the top of every class I took before I had reached here. With all the changes around me, my will to be the best stayed un-shaken. The Semester ended and the results said something else to my despair. I had barely made it in every subject. My world was shaken and so was my confidence.

The mind rules the body. And true to that, my body de-railed as well. Small Pox – the doctor declared as I was admitted into the hospital. I stayed there for 10 days, delirious and not knowing the difference between daylight and night – or the days of the week. All alone and broken in every way.
The return back to hostel did not change the way felt. If anything, I felt alienated. I avoided people, feared social interaction at all levels and concluded that I was a failure. Nobody said much around me. I wasn’t sure if my imagination drove circumstances or if the reverse was true, but everything seemed to go wrong.
Thoughts of killing time or killing myself tortured me at all times. I had moved to the last benches in the class room. My scores and my attendance only got worse with the passing months. With no motivation, no friends and no goal, I simply existed from one day to the other. The teachers barely tolerated me and even recommended that I not be allowed to take the exams. But my pleas with the Head-Of-the-Department were met with sympathy and he granted me permission to appear for the exams.
Then began the ordeal of getting ready for the world – a world where competition was stiff, a world where failures were not given a chance, a world that judged everyone even before the race began. Amidst all this chaos, I dared to continue to dream of pursuing a Master’s Degree on the shores of America. After all, it was something I had held on to ever since I was a little boy.

I prepared for TOEFL/GRE and did the best I could. But the results once again spoke of my inefficiency. That was the lowest point for me. I had no one to turn to for consolation. Everything and everyone seemed to mock my failure. I was lost and shattered in every way.

Like they say that every curve has a trough and a peak, I had hit the bottom and now was a time to bounce back.
I decided to look out for a job in Hyderabad and unfortunately Software market hit rock bottom in late part of year 2000. Friend of mine during chit chat mentioned of Software testing can be good future as Industry will move towards maintenance projects where Software Testing skills will be key. It was the first time in life I heard about Software testing. I put my heart to learn software testing fundamentals and became ready for attending interviews, Lot of good companies reacting positively for my resume with Software Testing as primary skill set. There came the first ray of sunshine and hope. – my interview at Oracle. It was a position that involved testing software. A casual remark in front of friends about testing and pat came the reaction – Testing is not for serious professionals who are good at what they do. I have accepted my destiny with both hands. I would like to quote (From Wings of Fire)  life turning conversation for Dr Abdul Kalam, When  Dr Kalam deeply depressed and dejected for his unsuccessful attempt for Indian Air Force which is his long cherished desire for Fly, happen to visit Rishikesh and met Swamy Sivananda. Swamy Sivananda says to young Kalam “ Accept your destiny and go ahead with your life.You are not destined to become an Air Force Pilot. Get this failure, as it was essential to lead you to your destiny. Surrender to the wish of GOD. Dr Kalam accepted  what he got with heart and started enjoying,  and We know the rest of history.
I sat down and analysed this for myself. Really? Why?  Why is this job different from the others?
From various books and quotes, I had garnered and understood that every job is equally important. There was no superior or inferior work.
Armed with that knowledge, I went on to clear my interview, accepted a junior level position and began my first job. I was proud and content of what I had. My job became my obsession, my field where I played and my everything in just a few days. I was posted in India initially and people in various teams, the world over saw that I had begun to turn things around in the field of testing.
There were jokes that my days consisted of 48 hours. They said I never slept and lived in the office. People in various levels began to notice the quality of my work and my commitment. People reacted in all possible ways. Some encouraged and some tried to create hurdles. I remained steadfast. Simply focused on what I did and the best I could do.
Months turned to years and my promotions followed suit. I rose in my ranks professionally. From a mere Member of Technical staff all the way to being the youngest Vice President in just a few years. And all of this I owe to the Almighty, my well wishers and my hard work.
Dr Abdul Kalam as quoted once FAIL means First Attempt In Learning and there is nothing to feel sad for it.
I did not stop till I achieved my goal. And today I believe in the saying when I read it every morning.
“Arise, Awake, Stop not until your goal is achieved.”