Death is inevitable. It often leads to an emotion of fear in most of us as death takes away somebody close to us away. A very striking fact of death is that it comes uninformed, for most people. It is difficult to be ready for it as it is the final moment of life, the last time one can be with his loved ones on Earth. We are not yet sure of what happens to a person after their death but they leave behind a legacy of their own, among their loved ones.

This is a story about the death of a young boy’s father and how the father’s letters helped him live through 85 years of his life.

Cancer is a harsh, cold killer. I was 8 and a half years old and he was 32 years when cancer took him away from me and my Mom. I was devastated as I wanted to be with him. I felt angry at him for leaving me and Mom behind. I also felt lost as I had no clue where he had gone. His health was deteriorating, I knew that because he was in a hospital but I firmly believed that he would come back home soon. After all, we had even discussed a family vacation to Thailand in the coming year.

The day after he left us, his nurse gave me an envelope and told me that my father spent many of his hours with these. I took the envelope gingerly, unsure of what to expect. It read: When I am gone…I opened it and found several small envelopes with clear instructions on when to open them. I smiled and laughed at what my dad had done – a sense of order even in his final moments. In that big envelope, he gave me moments to cherish all my life. 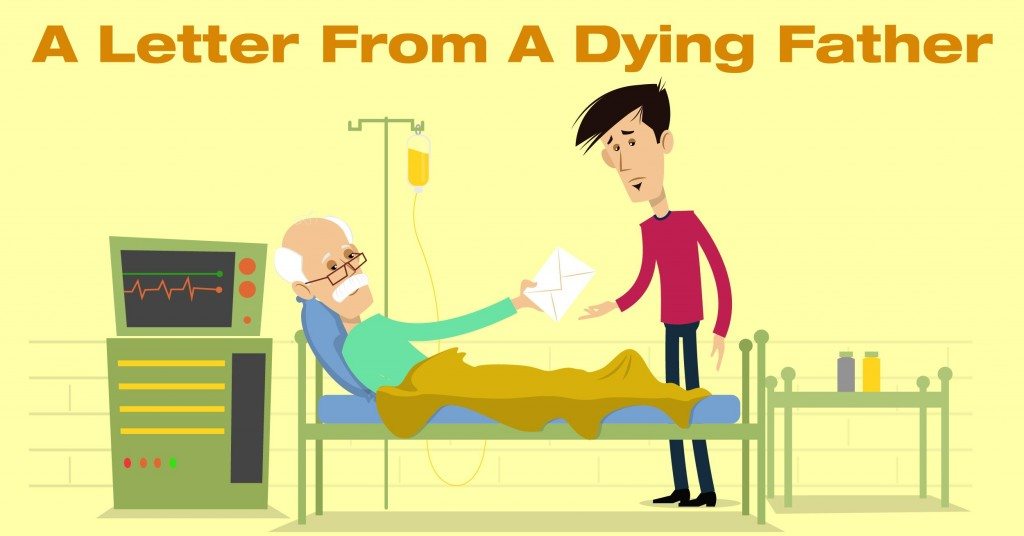 There were envelopes with several titles, some humorous ones like WHEN YOU HAVE YOUR FIRST KISS, WHEN YOU LOSE YOUR VIRGINITY. I felt like he was around every time I read his letters. I noticed an envelope marked AFTER I DIE. I opened it and read his letter –

I am sorry that I am dead. I really am. I didn’t want to die but I wasn’t given a choice. I am sorry, I didn’t tell you I am going to die. I was weak I could never see you cry. I am sorry, I wasn’t responsible enough to inform you and prepare you for my death.

I am sorry that I was selfish. I want you to need me and remember me.

My father was somebody who could make a crying person smile. He was so kind I sometimes couldn’t believe the stories my friends narrated about their strict father. He purposely wrote these letters in his untidy handwriting so that I would calm down even before I would begin reading them. When he was around I spoke to him about sports, studies, and even mom. He explained things even better than my mother. He never shied away from expressing how much he loved me. He scolded me whenever it was required but cracked a joke soon after so that I would feel less bad. A father like him anybody would miss and I miss him.

I now believe that he must have thought this should bring luck. He was a superstitious man. Planning the future was a way to keep hope alive. He didn’t want to give up and he didn’t want to die. He knew he will be dying but he didn’t tell me. My loving father didn’t want to see me cry.

I remember a time when I was searching for a particular letter titled THE WORST FIGHT WITH YOUR MOM? I was a mess and I wanted to feel better. His letter helped as it read:

Apologise to her.  I don’t know why you’re fighting and I don’t know who is right. I can’t know the details but I know your mother and she is upset. A simple apology is all that you need to get over this.

She is your mother and she loves you more than any man alive now. She didn’t mind going through the pain of natural birth only because someone told her that is the best for you. I don’t think you need a better proof of her love.

Just apologize. I promise, she will forgive you.

I did what he said and he was right, Mom did forgive me. Not just that one time but later, too. My dad’s letters were my go-to place when I needed an advice of any kind. He had made letters for me for WHEN YOU GET MARRIED, WHEN YOU HAVE A BABY and also WHEN YOUR MOM PASSES AWAY.

They were all big defining moments in my life and I am so thankful to him for thinking through this and leaving me letters for all of them.

I read his last letter when I was 85 and admitted to a hospital.8 decades of living had left me weak and dependent on the tubes and other machines. I opened the final letter which was titled WHEN YOUR TIME COMES. I was scared to open it but knew that his words would help.

I hope you are an old man now. This letter has been the easiest to write. When you’re closer to death it becomes easier to talk about it.

When I was on my deathbed I thought about the life I had lived. I had a short life but a very happy one. You, my child, were a major source of happiness. Your mother and you together showered me with love and it brought me a peace of mind. I suggest you do the same. Look back at your life.

And I know you think I have a lot to say but here’s the only thing I have to say: you don’t have to be afraid.

I miss you. And I know you have missed me too.

With that letter, I felt relief washing over me yet again, just like it did with his every letter. He wasn’t physically around but he ensured that I had him, in life and death. I finally settled in peace and waited patiently for the final moment to come.

Death is inevitable but you have to move on. Are you not able to overcome the grief of a loved one’s death? Talk to the Experts at YourDOST to get help on moving on.

Letters From A Dying Father To His Young Son