“In 2010, semi-retired from acting, I was keeping a low-profile for a number of reasons. First and foremost, I was suicidal. At the time I suffered in silence. As so many do.“

Wentworth Miller who rose to fame after the successful run of Prison Break had his fair share of lows. Soon after the end of the TV series his career went through a downward spiral and it was put to a halt. While he was desperately trying to revive his acting career, he was fighting far bigger demons – many inside his head.

Although he had suffered from depression since his childhood, 2010 though, was the lowest point of his life. In a desperate attempt to find some relief and comfort, he resorted to eating. It could have been anything else: drugs, sex, alcohol. But he found his way to deal with his mental trauma and damaged emotions only through eating.

“Ashamed and in pain, I considered myself damaged goods. And the voices in my head urged me down the path to self-destruction. Not for the first time. I’ve struggled with depression since childhood. It’s a battle that’s cost me time, opportunities, relationships, and a thousand sleepless nights.”

And soon he put on weight – a lot of it.

“In 2010, at the lowest point in my adult life, I was looking everywhere for relief/comfort/distraction. And I turned to food. It could have been anything. Drugs. Alcohol. Sex. But eating became the one thing I could look forward to. Count on to get me through. There were stretches when the highlight of my week was a favorite meal and a new episode of TOP CHEF. Sometimes that was enough. Had to be.
And I put on weight. Big f–king deal.”

It didn’t take long for him to come across such pictures. It hurt him further. But like the survivor (Michael Scofield) he played in the TV series, he survived this. He persisted.

When the internet memes resurfaced after so many years, Miller decided to break his silence and became vocal about his mental health issues and depression.

“The first time I saw this meme pop up in my social media feed, I have to admit, it hurt to breathe. But as with everything in life, I get to assign meaning. And the meaning I assign to this/my image is – Strength. Healing. Forgiveness of myself and others.”

For all those going through depression and suffering other mental health issues, Miller added –

“If you or someone you know is struggling, help is available. Reach out. Text. Send an email. Pick up the phone. Someone cares. They’re waiting to hear from you.”

The LAD magazine realized their mistake and apologized for their misconduct. 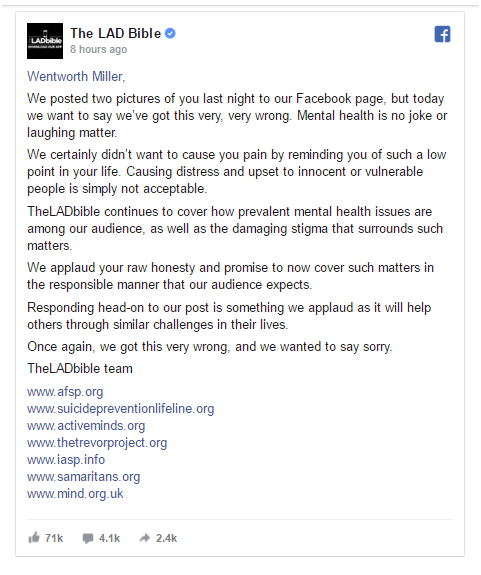 Miller in a brave manner went on to prove: Mental Health is no joke!

With such brave and honest steps taken by celebrities, we are sure this initiative towards removing the stigma around Mental Health only becomes stronger. We at YourDOST applaud and thank the actor for this!